CONSTRUCTION OF A HOME FOR EARTHQUAKE AFFECTED CHILDREN IN SOLUKHUMBU

A huge thanks to our supporters at Arhaus for contributing over $112k to this important project!

UPDATE! In January 2019 we broke ground on the site for our home for 100 children from the Solukhumbu. In May 2019 we were well on our way and in the midst of construction. In February 2020 the building is on to the third story. We hope to open the home to 50 kids in May 2020 for the beginning of the new academic year. In 2021 we hope to support 100 kids.

Watch a video about the project kick-off here https://youtu.be/LFvLMYdNfgU

May 2019 – construction is well underway. 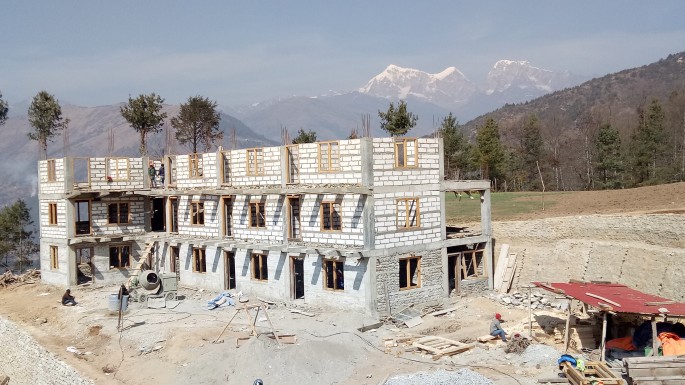 The mega earthquake of 2015 that killed 9,000 people, destroyed 288,000 houses, and internally displaced 188,900 people, marked its third post-earthquake anniversary on April 24, 2018. The Solukhumbu region was hit hard, since it was one of the closest districts to the epicenter. Nepal’s Central Government, due to economic reasons, did not declare Solukhumbu as an emergency district. Because of that, recovery has been slow and is still ongoing, although today a high coordination between local government and development organisations has developed.

Since the Nepal Earthquake, we have been very busy providing much needed relief efforts, including rebuilding schools, family houses, and access to clean drinking water. During the course of our work, we have seen deeper challenges post-earthquake that especially concern the children who have suffered the loss of their families and homes. These children are at serious risk of child abuse, trafficking, and childhood marriages. It has been three years, but still many children have not been able to return to any form of schooling.

In this regard, local government and the Authority of Reconstruction of the Central Government department has extended the call for support from nonprofit organisations working in the district.

OUR NEW PROJECT IN SOLUKHUMBU DISTRICT

We have initiated another project to support more of these at risk children. Our plan is to provide a safe place for them to live that would be very similar to our Himalayan Hope Home project in Kathmandu, but with a larger capacity for the benefit of about 100 boys and girls. They will have a safe place to live; nurturing, and loving caregivers and support staff; and access to education.

Slow recovery in the wake of large disasters has high risk factors to children, making them more vulnerable than ever. These are defenseless children at risk of permanent dropout from mainstream education, ultimately making them more susceptible to the risks of trafficking, forced child labor, early marriage, and abuse. There are hundreds of children still awaiting much needed support. With the local government calling out for local NGOs to help support these children, The Small World takes accountability for these children who, if not taken into refuge, are in direct threat of exploitation and abuse.

– 2 rooms for office and meetings with guests

– Separate toilets and showers for girls, boys and teachers

– Auditorium capacity for up to 150 children

-Land for the children and staff to grow their own vegetables and food for sustainability, as well as to teach agricultural skills to the students.

We need your generous support!

The Small World is requesting to all our generous donors, supporters, and volunteers to help support our first special project of this kinds to deliver lasting impact to hundreds of children faced by unique challenges.

The Small World in Nepal has acquired over 5000 square meters of land from internal resources within the Solukhumbu district head quarters in Salleri where schools and colleges are located for children’s education.

We want to extend tons of thanks to our long term supporter, Arhaus, who is leading the charge on this fundraising campaign!

You can donate today via PAYPAL or mail us a check. Learn more…

$50 will help to buy school books and supplies for one child.

$100 will help to cover school uniform expenses per child.

$300 will cover the yearly school tuition fees per child

$500 will cover yearly food expenses per child in the home.

$1,000 will help to build student toilets in the home.

$5,000 will help to build a fully furnished room for accommodating 5 children

$8,000 will help to build an auditorium for activities and events with a capacity for up to 150 children.